As I’m fond of saying to my parents, “I’m a grown-ass woman.” But that doesn’t mean I can’t have Harry Potter birthday parties. I put a lot of effort into planning my own party–combining craft tutorials from online and from The Unofficial Guide to Crafting the World of Harry Potter–and thought some of my website visitors might be interested in all the work I put in for one day of revelry. Unfortunately (for you, fortunately for me), I was so busy having a good time I didn’t take too many photos. Luckily, most of the blogs I used took care of that aspect.

The hanging lights were my favorite decoration and the one that pulled the whole thing together; to make these, I gathered toilet paper and paper towel rolls for several months and then used this tutorial to finish them. I bought a huge bag of battery-powered tea light candles for them.

For my sorting hat, I followed this tutorial. I loaded a sorting hat quiz on an ipad and had guests sit with the hat while they took the quiz, if they so desired. 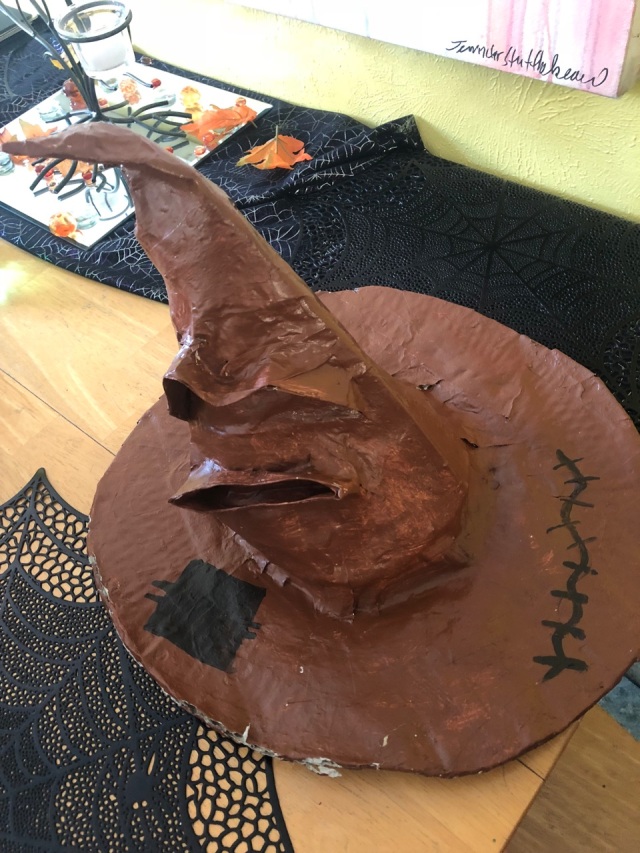 In the bathroom I wrote, with red wax pencil, “The Chamber of Secrets has been opened.” I printed out this image of Moaning Myrtle and taped her to the toilet seat cover, an idea I got from this website.

I used a couple of Halloween spiderwebs and spiders and hung those on the walls, as well as draping a Halloween cloth over the island in my kitchen where I served the food.

Any rooms I didn’t want people going into got this message taped to the door.

Basically what I did here was make my usual vegan party fare but dress it up with wizardly names. For example, tempeh balls (a vegan version of sausage balls) became Dragon Balls, the veggie tray become Herbology Snacks, etc. Here’s an image of the labels I used.

I did make a few special items.

For chocolate frogs, I bought a mold and some semisweet chocolate, melted the chocolate then poured it into the mold and waited for it to harden. Easy enough.

For butterbeer, I made two versions: alcoholic and virgin. For the alcoholic, I used one shot of butterscotch schnapps, one scoop of ice cream, and the rest cream cream soda. For the virgin, I just left out the schnapps. For both, I drizzled this vegan caramel sauce on top.

I also made these cute wizard hats.

For a cake, my partner made a simple cookie cake but decorated it with the words “Happy Birthdae Bonnie.”

On the main table, I set out these coloring cards and a lot of markers and colored pencils for guests to work on.

My partner built me six snazzy quidditch hoops, which we set up outside for people to play; he used this tutorial. We used two dodgeballs, a whiffle ball, two bats, and a golf ball for the snitch.

I made this scavenger hunt worksheet for people to fill out and passed it out to everyone when they came in the door; this provided a nice icebreaker. I included two games on the sheet: one was a Magical Creatures hunt for little animal figures I’d placed throughout the house (a stuffed tabby cat, a giant spider, a plastic rat, and two dragon figures). The other was a hunt for my Horcruxes. For these I came up with seven riddles the guests were supposed to solve in order to find the Horcruxes throughout the house. I also added a Quidditch Scoring table to the worksheet. 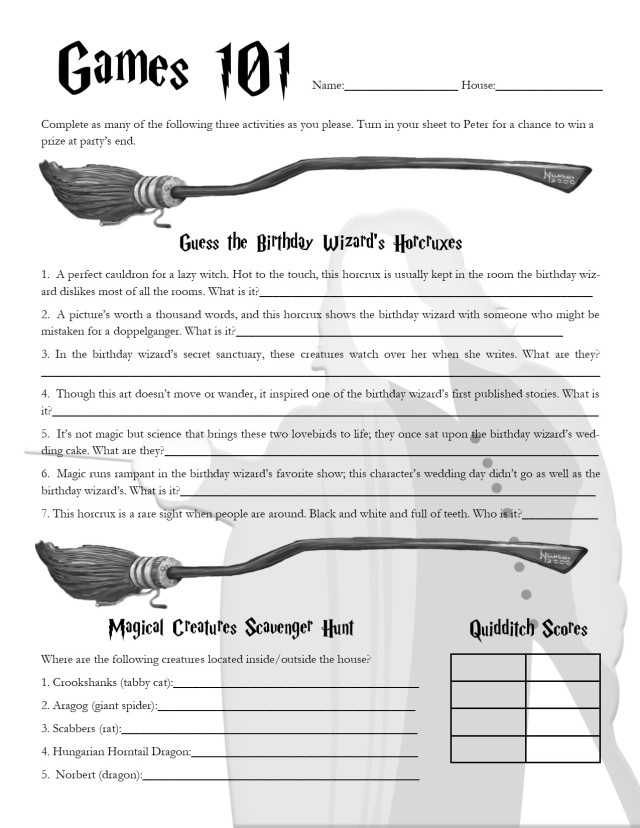 Anyone who turned in the scavenger hunt got to pick a craft I’d made as a prize. For these I painted a Harry Potter wine glass, made a couple of Monster Book of Monsters journals (took a journal, hot-glued fake brown fur to the cover, glued on five googly eyes to the fur, then cut the teeth out of white felt and glued that to the inside), filled these cute pillow boxes with jelly beans, and painted two Lumos/Nox light switches and a couple of decoration-only Grim teacups. I also bought two POP keychains to add to the prize selection.

At the end of the party, guests got to destroy a Dementor piñata, which I made using thrift-store black fabric draping a papier-mâché head and base.

One thought on “A Harry Potter Birthday”

Bonnie Jo Stufflebeam’s fiction and poetry has appeared in over 50 magazines and anthologies such as Fantasy & Science Fiction, Clarkesworld, Lightspeed, Fairy Tale Review, and Year’s Best Dark Fantasy and Horror. She has also appeared on LeVar Burton Reads as well as in six languages. She won the Grand Prize in the SyFy Channel’s Battle the Beast contest; Syfy turned her story set in the world of the Magicians into an animated short. For a complete list, visit Stories & Poetry.

She lives in Texas with three cats – Gimli, Don Quixote, and Gamora. She created and coordinates the annual Art & Words Collaborative Show in Fort Worth, Texas.

Bonnie is represented by Connor Goldsmith at Fuse Literary.